I have been quiet lately.   After returning from our trip to Scotland life took over.  Since late last year and the tears and the depression, I got back up and into the game.  I volunteered for an organization that I care deeply about and have been on their fundraising committee for their big event of the year.   It was hugely successful and thankfully now in my rearview mirror.  Did I also mention I’m running for local office?  That was another of my post-election decisions.  If you want to have an impact on your community, you have to step up and get in the arena.   I have been knocking on doors and meeting lots of people and listening to their concerns.  More on this later, but first I want to take moment to remember the beauty of Scotland.

After arriving in the wee hours of Wednesday, we spent two full days exploring the highlights of Edinburgh.  On day one we toured Edinburgh Castle and Holyrood Castle, and observed Parliament in session.    That was really interesting.   The Parliament building is relatively new, like the Scottish Parliament itself.  I wonder if it will change yet again before our next trip?  Who knows what Europe will be like in the next few years.  Like our own country, things change quickly, in ways you could never have predicted.

Esther and I stopped to chat with some women of the Labor Party who had a table set up near Edinburgh Castle on International Women’s Day. Of course, I wore my pink hat.  “Be bold for change.”

Everywhere we went we were able to get Wifi.  On our way in from the airport, we had Wifi on the tram.  The local buses had wifi, the hotel, most restaurants and museums.  The whole city was wired.   Did I mention that the Parliament building has free Wifi?  No matter where we went we were connected.  This is a model we should copy in the States.   It made life so much easier while moving around town.

We hiked up to almost the top of the highest point in Edinburgh, Arthur’s seat.  Esther and Dave did make it to the top.  It started to rain on our way down. That’s the city of Edinburgh in the distance.

One thing to keep in mind if you go to Scotland in March is that it’s off season.  That means that many of the tourist sites, especially outside of Edinburgh, are either on limited opening schedules or closed altogether.

While enroute to the Isle of Skye we stopped to take a look at this castle. It was closed, but so scenic.

While on the Isle of Skye we wanted to see the castle where Bonnie Prince Charlie was holed up trying to keep one step ahead of the English army.  Bad luck for us, because it was closed until April 1st.  Never mind, we were able to find plenty to do.

The ruins of Urquhart Castle on the shores of Loch Ness

Then there’s the other unknown when you travel in Scotland — the weather.  The Scots didn’t seem to mind the wind or the rain, or often both, but we were not hardened like the locals to withstand this brutal weather.   Our day in Oban was cold and rainy.  We spent it mostly indoors, at the military museum, at the Oban Chocolate Company, and to top it all off, at the Oban Distillery.  Did I mention that whisky tasting goes really well after a cup of hot chocolate with fresh whipped cream? 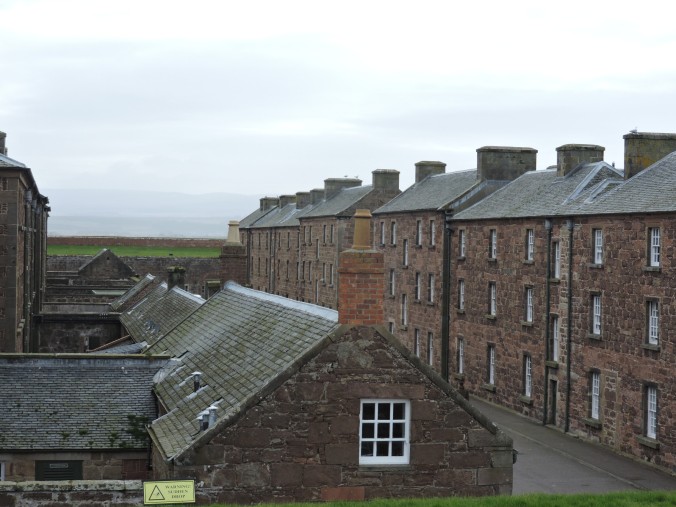 Fort George, built after the Battle of Culloden to ensure there wouldn’t be another rising.  While it was never used for its original purpose, It remained a military installation and has a military museum.

Most larger towns in Scotland had a war or military museum.  In American we never really experienced war on our territory, at least not since the Civil War.  In the U.K. wars were long and took a heavy toll.  We entered WWI in 1917, while Britain entered in 1914.  The Scots fought in numerous wars  and were proud to share their stories of sacrifice.  I think we saw at least four of these  museums.

And then there was Outlander . . .

One of the most interesting places we visited was Culloden Moor, the site of the famous battle in 1746 where the clans took their last stand against the British.  If you’re a fan of the  Outlander series like I am, you are very familiar with this battle and its significance in Scottish history.  We walked over the battlefield and paused at the clan markers, just like Claire did when she came in 1968.   This is not the Fraser marker, but one the many set up years later to remember the fallen clans.

Then there are the castles.  some castles are still intact, but many are just shells, either because they did not survive the test of time, or were intentionally destroyed to prevent an enemy from taking it.  All were built strategically near a loch or on the top of a hill.  After leaving Edinburgh, the first stop on our trip was at St.  Andrew’s.

Ruins of the castle at St. Andrews. It was raining, because if you’re in Scotland, you must have rain.

None of us were interested in golf, but the town was a worthy spot for other reasons.  St. Andrew’s is famous for having some of the best golf courses in the world.  In addition, before the golf courses, it’s claim to fame was being the location of the oldest university in Scotland, and also was the ecclesiastical capital of Scotland until the reformation.   The cathedral, the largest in Scotland, now lies in ruins.  And, of course there is a castle!  It also has great  views of the ocean.

The beach at St. Andrews

I soon learned that navigating pub food for someone who doesn’t eat meat was going to be challenging.  Every pub has standard fare which usually includes a hamburger and chips, fish and chips, salad and chips, soup and bread, and various meat pies.  Next to our hotel was a pub that specialized in pies:  lamb pie, Shepherd’s pie, kidney pie . . . you get the picture.  And then there’s the ubiquitous salmon and eggs.   We pretty much bypassed the Scottish/English breakfast of bacon, sausage, haggis, and egg for either porridge or salmon and scrambled eggs.  In one B&B they served salmon from a nearby loch and eggs from their hens.  Talk about local food!  And everywhere we went we had the pleasure of eating either fresh blueberries and raspberries and blackberries or fruit jam.

And then there is the liquid libation.   We did taste a lot of whisky on our trip.  My thanks for Esther and Dave for introducing us to the fine art of whisky tasting.  Whisky is made with three ingredients only.  Any more,  and it’s not whisky.  These are:  water, yeast, and barley.  That’s  it!  How then, you ask, can a whisky have the flavor or vanilla, orange, salt, and grass?  It’s all in the barrel.  Whiskey is aged in oak barrels.  Sometimes they use another kind of wood in the lid.  Over the years, flavors from the wood are absorbed by the whisky.  At Talisker Distillery on the Isle of Skye, the water has a bit of a salty taste, probably because of its proximity to the sea. 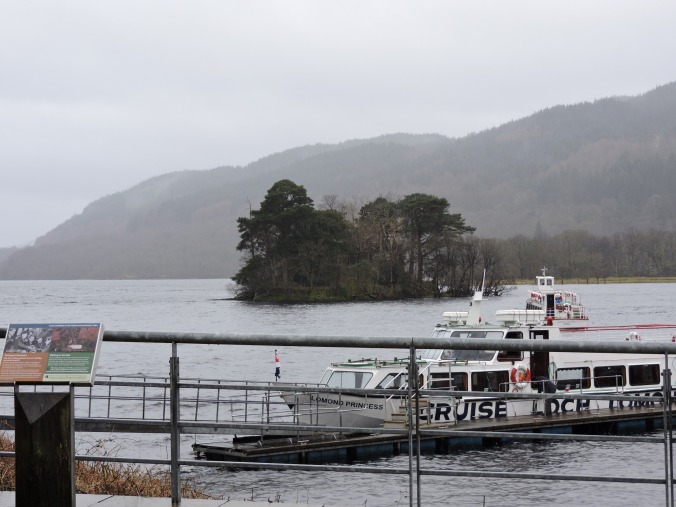 We stopped briefly at Loch Lamond to get something hot to drink, but we didn’t have time for a cruise.

We saw a lot and did a lot.   Larry bravely drove on the wrong side of the road and we got our oversized American luggage in and out of a modest European station wagon.  We ate and drank and hiked and marveled at the enduring history of a people and a land.  At the end of the day, though, it was all about the view.

2 thoughts on “On the road in the Highlands of Scotland”