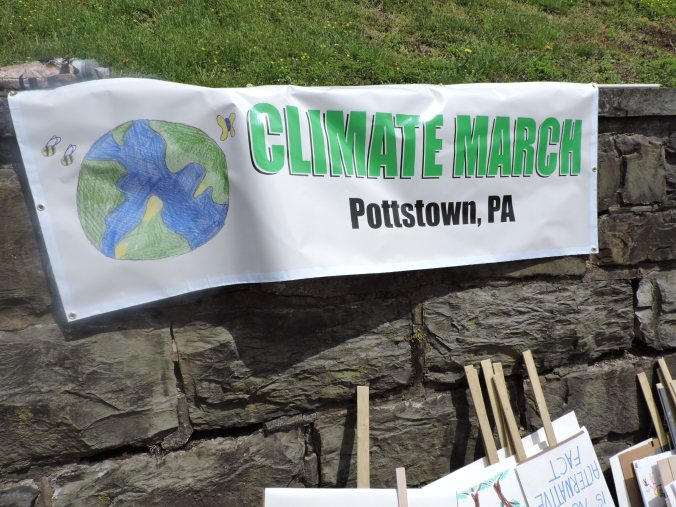 Waiting for the march to begin; wall separating the Hill School from High Street in Pottstown, PA

My readers probably know that since last year’s election, I have become a bit of an activist.  There are so many things to protest, where is a woman to start?  Women’s issues, healthcare, financial regulations, voter’s rights,  jobs, taxes, the environment . . . and so it goes.  In March I met with a few friends and made a suggestion:  we should hold our own march.  I’m not sure at the time that they believed it would happen, but it did.  With the tremendous support of my husband and a few good friends, we pulled it off.   And so was born the Climate March Pottstown. 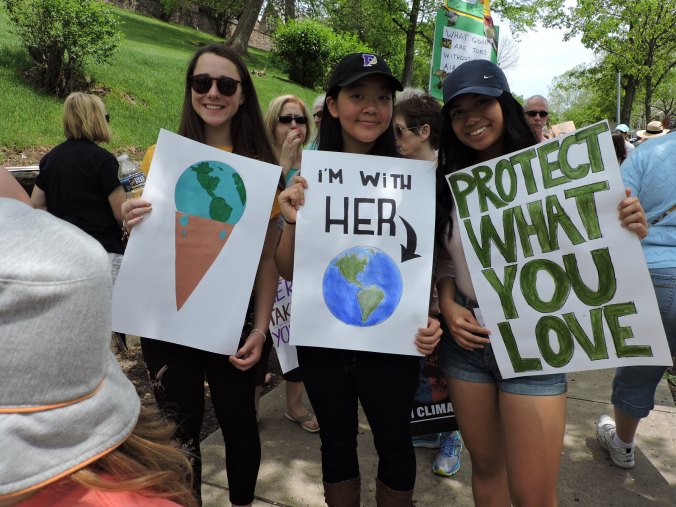 The day of the Climate March was unseasonably warm.  Great day for a climate march, right?

We were ready:  we had the banner, t-shirts, signs, rally site,  and speakers.

At noon we arrived at the march start point and waited to see who would turn up.  A few people trickled in over the next half an hour, then they came in larger numbers.

By 1 pm, our stated start time, we still didn’t have all the people  we were expecting, but we did have the press.  We made the front page of the local paper the next day Sunday, 30 April, and we got coverage on the evening news by Philadelphia’s ABC station.

At the end of it all, we estimated we had close to 300 marchers.  For a small town, that was a great feat.  More than the numbers and the enthusiasm, we proved that if you have an idea you believe in, people will turn up. 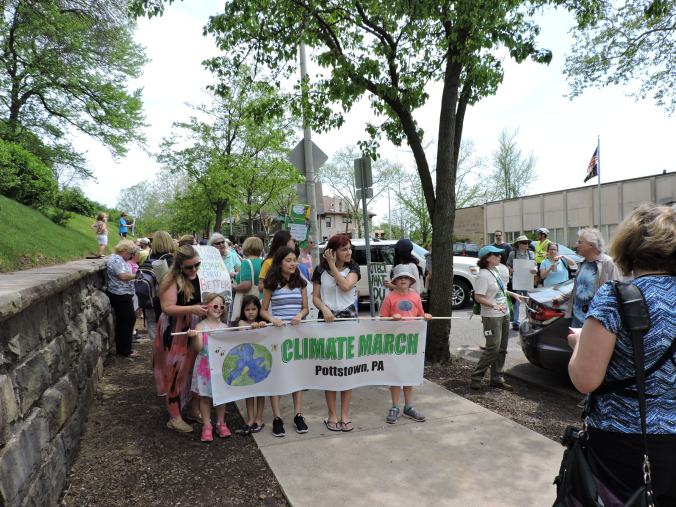 We’re off! The children led the way.  I’m standing over to the right with the blue cap.

After we launched, people kept turning up to join in, and our march got bigger and more energized.  Some people were singing and chanting, repeating lines from the Women’s March, or altering them to suit the theme of the environment.  We had two young women singing hymns.

A man on a bike rode along by the side of the road to keep an eye on us and help out.  We had a super group of eight students from the Perkiomen School along to help get folks across the street and ensure that everyone was able to keep up, slowing down the front when some lagged behind.  Since we had some marchers in wheelchairs or with canes, that was important.

Throughout the day, it was the young people that continued to amaze me.  Families came with their children in strollers, young women came with friends, and entire families turned up with matching t-shirts. 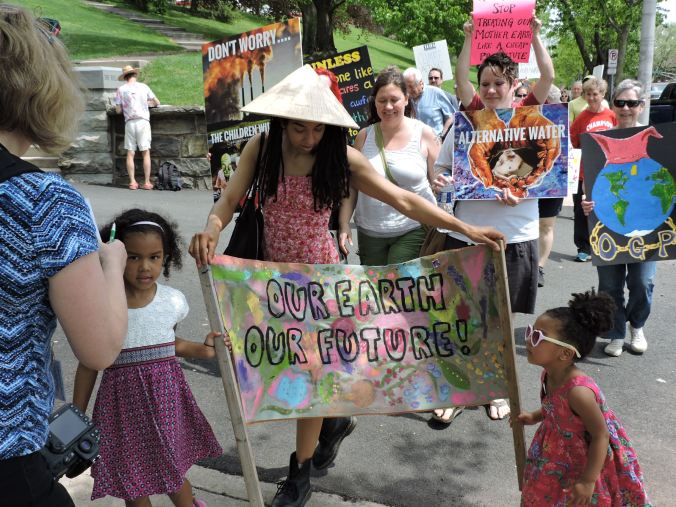 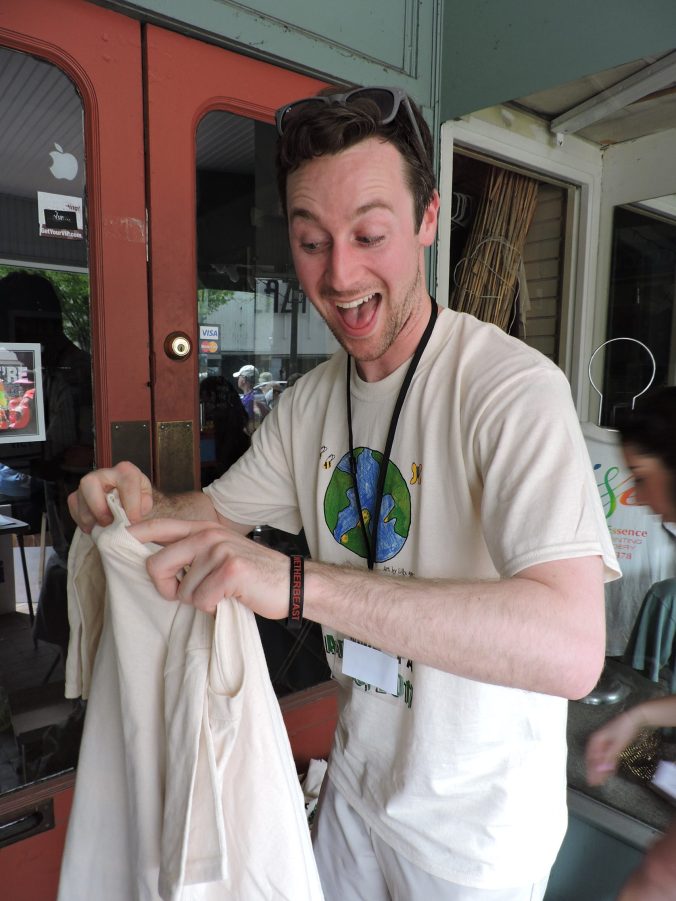 Our cheerful t-shirt seller getting some shirts to marchers along the route.  We weren’t allowed to sell at the rally site, but a number of marchers who didn’t already have shirts, wanted them on the day.

People were really creative with the signs.  Below are some of the high school students who turned up to march.  It’s their future, after all.

Some more of the young people who came along to show their support for energy saving ideas and to support Mother Earth. 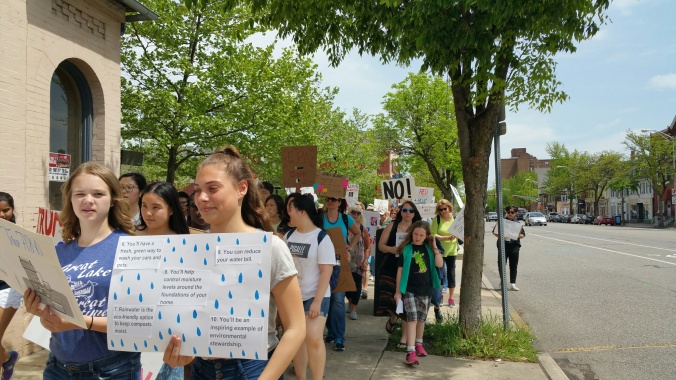 By the time we reached the endpoint, a park situated on the banks of the Schuylkill River, everyone was ready for a drink, some lunch, and a rest.

And, then, the rally.  Above,  some of the marchers relaxing on the hill in front of the river.  Some local food vendors sold  sandwiches, lemonade, and Mexican food.  All in all, it was a day well spent.

Some of our student volunteers.  They had fun too!  Now we have to wait and see what the impact will be on the policy environment.

One thought on “Marching for Mother Earth: The People’s Climate March”