Two weeks ago I attended the Edinburgh Yarn Festival (EYF),  a  fiber festival in Europe.  After years of going to Maryland Sheep and Wool and New York Sheep and Wool (Rhinebeck), I wanted to see what an urban fiber fest was like.  It did not disappoint.  The Edinburgh Yarn Festival was on held on March 9-12 this year.   Friday and Saturday were market days — codeword for shopping, and 8 – 12 March were class days.  In between there were opportunities for seeing the city, taking a day trip, joining others for knit night, and a traditional Ceilidh – Scottish dancing.  It you’re a fiber fest officianado you probably knew that some of these events were limited and required a combination of luck and dedication to score a ticket.  Esther and I signed up for classes at 9 am on the Saturday of Rhinebeck in October 2016.  Advance purchase tickets sold out quickly as did space at the Ceilidh.  But no worries.  There was plenty to do in the evening in a city that parties hearty.

If you’re at the EYF you’re in good hands

The organizers of the EYF had thought of everything.  Have too many bags to carry and that coat and cardi getting to be a drag to carry?   Check your things at the coatroom for a small charge.  Need a place to sit and get off your feet?  Take a load off at the podcast lounge. Want to learn more about Shetland Wool Week?  Stop by the table outside the marketplace and get details along with a free pattern.  The line for marketplace was in front of the Corn Exchange, and the line for class goers was in the back.  Later in the day you entered on one side and exited on the other, eliminating the annoying situation of bumping into someone coming in while you’re going out.  Brilliant!  Need something to do on the nights before the event?  Don’t worry, Mica and Jo have you covered.  Want a souvenir of the show with some articles to read, information about vendors and Edinburgh and patterns?  You can purchase  a copy of Wool Tribe, the event companion magazine.  They even sent out a last minute email alert about construction enroute to the venue so folks could get a head start on their commute. 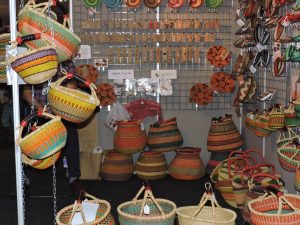 Esther and I had the good fortune to snag a class on Friday and Saturday morning.  This also entitled us to early entry to the festival.  We were able to get in some quality shopping and browsing time before the crowds arrived.  Later in the day, it was wall to wall people.  On Friday we took a fair isle class with Hazel Tindall.   Below are  some of the samples of the mug hap.  Ours did not quite look like these. 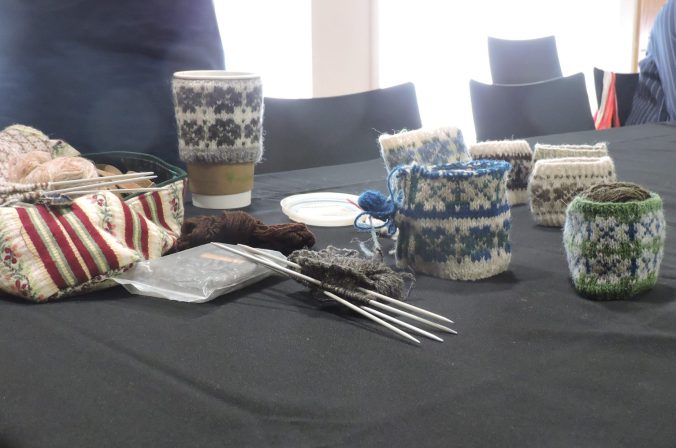 Samples of the mug haps in Hazel Tindall’s class on Friday.

As a novice fair isle knitter, I learned a lot.  The highlight was the steek.   Yes, that means you have to cut your work. 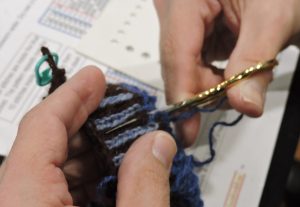 Coffee and sweets are as Scottish as apple pie in the US.  So of course the EYF had coffee stands set up in every corner, and a display of after lunch treats on the counter.  After our class on day one we were famished and waited in line for a sandwich and piece of cake.

In Scotland there are many kinds of wool

For an American like myself used to mostly Merino, EYF was an eye opener.  I made a decision not to buy any fiber that I could easily get at  home.  This meant no merino, alpaca, cormo, corriedale, Romney, etc.  I was on the lookout for purely British breeds, if possible, something really unusual.  I did my research in advance and was determined to come home with some St. Kilda’s lace.  I bought a skein at The Knitting Goddess’ booth.

This lovely yarn is made from the fleece of two rare breed sheep — Soay and Boreray, that live on the remote islands of St. Kilda.  Unlike most sheep, they don’t need to be shorn.   The human inhabitants of these islands were evacuated in the 1930s.

My next stop was Daughter of a Shepherd.  I bought some of her 4-ply Hebridean  and Zwartles dark brown yarn and a skein of Nature’s Luxury Foxen meets Merino.  The yarn has a slight red tinge from the Foxen sheep.  Now that’s unusual!  Esther made some purchases as well, but both of us were trying to be good.  It’s not like we don’t have any yarn at home, and on top of that, Esther is a spinner.  She was good, though, and didn’t buy any fleece.

Tukuwool was very tempting.  We stopped here to admire the rustic yarn and samples. 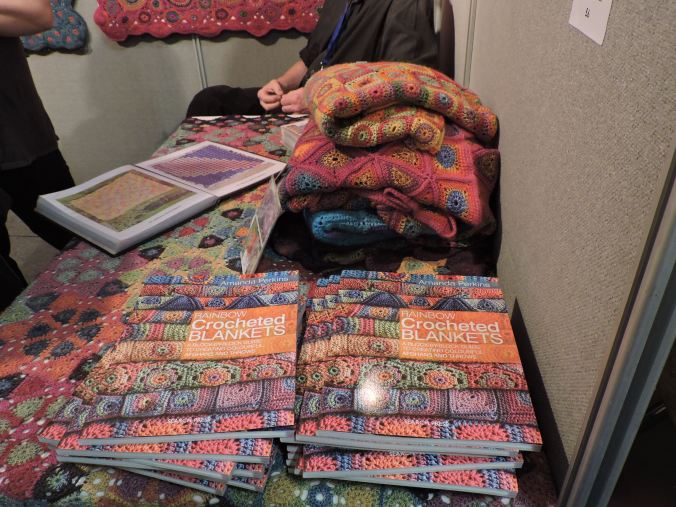 Did anyone see these lovely crocheted blankets?  True pieces of art.  All I can say is wow!

A knitter can always use notions.  I bought some woven ribbon for reinforcing button bands and checked out the buttons.

These two ladies proudly modeled their Kate Davies’ Scatness Tunic.  I really need to make this sweater.  And here is Kate Davies’ booth and some of her samples.  I love Kate Davies and her Buachaille yarn, but was too shy to go and meet her.

Earlier I talked about the sheep who live on the St. Kilda Islands and the lovely lace yarn made from their fleece.  Another remote place in Scotland is Shetland.  We saw more several booths that sold Shetland yarn.

Then there was the table with information about Shetland Wool Week.  This is a weeklong event held on the Shetland Islands.  Esther and I stopped to talk to the folks at the booth and pick up a free pattern for a fair isle hat.  Esther bought yarn to make the hat at Jamieson and Smith.  Below are some samples of the hats in different color ways.  She’s already started making it.

Day two meant another class and a quick look at the podcast lounge and Blacker Yarns.    Not one to avoid a challenge, I had signed up for Nancy Marchant’s brioche class.  Nancy is a great instructor who was very patient.  She assured me that if nothing else, I would leave the class understanding the basics.  She was right, but along the way I made every mistake in the book.  Here is my sample.  As you can see, I did eventually “get it.”

There was so much more to share.  Yarn bowls to die for.

And these three women with the gorgeous color work sweaters.  I couldn’t take my eyes off them.  I never got a chance to talk to these ladies, but if any of you read this can you tell me the patterns you used?  These fair isle garments are pieces of art.

Ysolda Teague had a large booth with yarn and patterns and samples.  Her friendly staff caught my attention with their activist t-shirts.  I had to stop and take a picture, front: 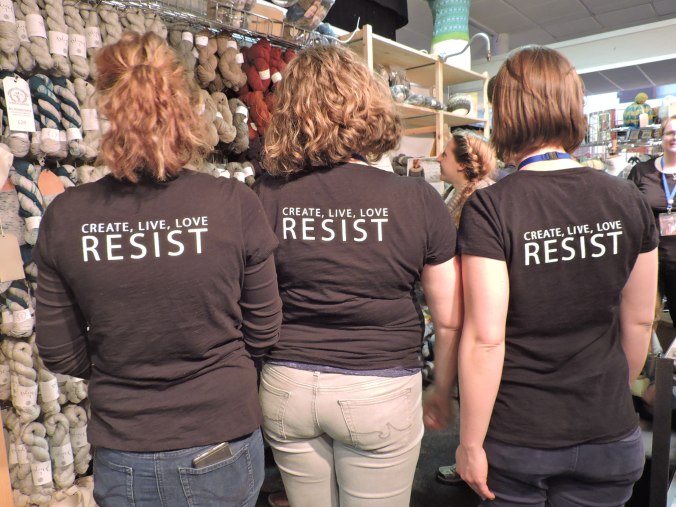 We sat at a table with women from all over Europe.  I sat next to the lovely Hege of Red Thread and her friends.  Hi Hege!  We were the American couple at your table.  Loved your blog post!

Esther and I did not make it to the bitter end.  We decided to head out after our class on Saturday to meet up with the guys.  But first, we took a walk through the podcast lounge and found the Blacker Yarns booth.   More St Kilda’s lace:  I’m in love.  What a great way to end our time at EYF.

After the EYF we went hiking at Arthur’s Seat and then to bed to rest up for the next leg of our trip.  But first, you didn’t think I would end without a pussyhat?   Because,  even at the EYF there are signs of the resistance.

Podcaster Vero and friends in the lower lefthand corner of this photo.

5 thoughts on “The Edinburgh Yarn Festival”