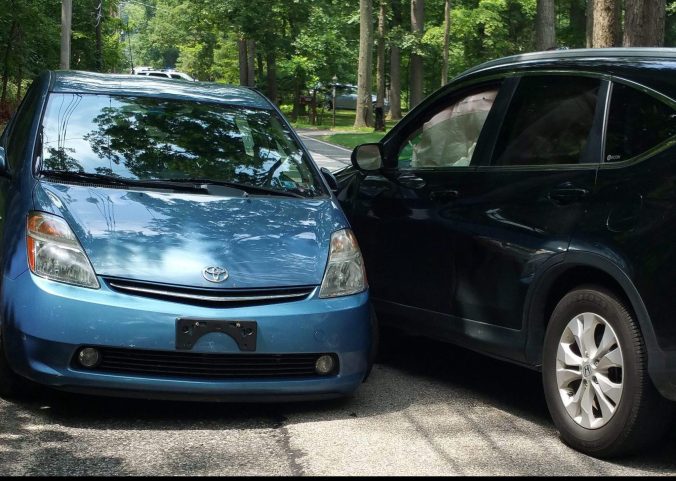 Last Saturday I left the house to go to a hospital in suburban Philadelphia.   Our cousin Richard was very ill and I had planned to spend the afternoon visiting with him.  I completed my morning routine:  fed the dogs, walked Barkley, took them outside again and left them with a peanut butter smeared Kong and some calming music before heading out.  The day did not turn out the way I expected.   A few miles from the hospital as I was traveling along a side road an SUV coming towards me drifted into my lane.  I honked and tried to get out of the way, but there was no shoulder and no where to go.  I did visit Richard, but before I got to his room I made amy own trip to the emergency room.

I want to assure my readers that I am fine.  I must have seemed a bit confused and disoriented to the police  because they recommended I go to the hospital to get checked out.  I was going there anyways, I said, no problem!  I have a bruise from the seat belt and what the attending doctor called a “mild concussion.”   They did a CT scan and x-rays and offered me what was probably a $20 Advil.  My sense is that when you get shaken up good and show no other injuries, that’s what they label it.  All I could think about was that I wanted to visit with Richard, who lay five floors above me in much worse shape in the cardiac ward.  I did get up there later and was, I think, able to provide some comfort.    Larry was in Iraq so I connected him with Richard on Whats App.  Cousin Andy drove me home and I picked up a rental car a few days ago thanks to help from my neighbor.

There’s a saying that goes “no good deed goes unpunished.”  I left the house intending to visit Richard and provide some support to our cousins, and ended up with a headache and some bruises and no car.  But that’s not really what happened.   The real story is at the same time more complicated and much simpler.  Yes, if I hadn’t had to clean up Shiloh’s throw up that I noticed on my way out and left the house a few minutes earlier I might not have been in an accident.  Or, if I had known that Cousin Andy was not going to get to the hospital at 1 PM but instead a few hours later, I would have left later as well. This is all true, but at the same time, it doesn’t tell the true story.

Here’s what happened.   I was driving along a side road because my GPS told me that was the best way to go.  It was a two lane road with no shoulder, and on my side of the road, a slight rise next to the spot where I was hit.  I noticed that the car coming towards me was drifting into my side of the road.  I had the presence of mind and the reflexes to slow down, pull over as far as possible, and honk–not necessarily in that order, at the oncoming car to warn it to move back into its lane.  If I had not done these things it probably would have been far worse.  I might have been hit more head on, my airbag might have deployed and bruised my face, and my car might have been totaled.   I called the police as soon as I got out of the car and made sure the other driver was OK.  I got a police report and a tow.    I called Cousin Andy to let them know I was delayed.  Yes, I got shaken up, was sick that evening and didn’t sleep.  I will be OK in a few days or a few weeks, and hopefully so will my car.

This is what really happened.  I was alert and paying attention to my surroundings.  I got as far out of the way as possible.  I have good health insurance and good car insurance.   I have kind  neighbors and friends who were there for me when I needed them.  I have a wonderful husband who cut his assignment short to come home and help out so I could rest.  And, last but not least, my car will be OK and I’ll get it back in two weeks.  Could I have avoided it?  If you believe in fate, the answer is no.  Even if you don’t, things happen.  They just do.  You can’t avoid life and you can’t always avoid a teenager who isn’t paying attention.  By the way, she was OK too.  She lucky too.  I hope her luck sinks in and next time she doesn’t take her eyes off the road.  Her parents and boyfriend came right away to help her out.

I went to the doctor and he advised me to rest, avoid driving, computer work, TV, reading, and anything except mild exercise.   I’m not supposed to sign anything or make decisions.  Or, do really anything that involves my brain.  Yikes!  That doesn’t leave much, does it?  No problem, I’ll watch the news on low volume resting in my chair with my feet up, take afternoon naps, and do a lot of knitting.  Larry gets home later tonight and then he can take over the dogs and the garden and the mail and everything else.    Especially those high intensity brain involved tasks.

So here’s what I learned.  Having a positive outlook and staying optimistic is very important in life.  When in a stressful situation it’s also key to keep your wits about you and think about what you need to do.  I called the police and later had the presence of mind to take pictures.  I have a mental checklist of what you need to do in an accident.  I highly recommend you have this list and keep it on your phone or on a piece of paper in your glove compartment.  Believe me, when you’re standing on the side of the road in a strange place you may not remember what these things are.  Most importantly, I am alive and a car is replaceable.  Your brain, by the way, is not like a hip or a knee;  it is not replaceable.  Things could have been a lot worse.

Here’s another thing I learned.  Money is only money and it won’t give you back your life or your health or time.  It made me think about how much joy I get working in my garden and walking the dogs and hanging out with friends.  These things mostly don’t cost anything.  But they do require good health.  We have gotten used to living larger than necessary.  We collect things and have too much stuff.  When it comes right down to it our needs are small.  We value good food and good company, friends and family and the dogs.   I still have all of that, even if I have to rest for a while before I can get back to my normal busy and active life.  I may be a bit quiet over the next few weeks.  I have to be able to tell the doctor when I go back in two weeks that I did rest and stayed away from the computer and using my brain.  Now let me go put my feet up and rest.

This ballon passed through the neighborhood a few weeks ago

4 thoughts on “A trip to the hospital, times two”