Since late March I’ve spent many hours knocking on doors.  As I mentioned in an earlier post, I am running for supervisor.   I’ve had doors slammed in my face, had smiles and hugs, and everything in between.  I talk about taxes, sewage and water, traffic and lighting, and development and zoning.  While there are a lot of things I don’t know about, there is one thing I tell everyone:  I will tell you the truth.

Telling the truth is an undervalued trait.  It involves understanding the issues and asking questions.  It means that sometimes people won’t like you or your message.  And at the end of the day, it means that some people may be harmed by your decisions.  Despite these possible consequences, I decided early on that I will not deceive, hide from, or manipulate the truth to help my campaign.  This has resonated in a community where getting information is difficult.  It shouldn’t be.  The unavoidable question that immediately comes to mind is, if they won’t reveal the truth, what are they hiding?  Whether or not this is true, in the absence of transparency, it is inevitable that people will read between the lines.

When you tell the truth it may involve bad news.  The bad news in my community is that development is on the horizon.  Beautiful family-owned farmland is being courted by developers to build high density housing developments.  The people I have met don’t want these developers or their promises to pay for road improvements or sewage pumping stations.  They want peace and quiet and safe streets.  They don’t want 18-wheelers barreling down their country roads.   They want their children to enjoy neighborhood playgrounds.  When they attend meetings or ask a question of local officials, they want a straight answer.  And they know when they’re being played or dismissed.

There are times when we have told a lie.  We tell little white lies to our husbands when we buy a new pair of shoes and don’t want to admit it.  We sneak our purchases into the house.  We tell our friends that have a conflict and can’t make it to lunch because we want to do something else instead that day.  We tell the boss that our sniffle is more serious so we can take the day off.    These are all technically lies, but they are mostly harmless, without victims.  The lies our politicians tell us are not without victims.   Saying that global warming doesn’t exist threatens our ability to continue to live on this planet.  Saying that our health care costs won’t go up or that our coverage will continue is the worst kind of lie.  Suggesting that poor and disabled Americans somehow are less important is unusually cruel and lacking in the most basic kind of humanity.  The selling out of our government and the highest echelons of power to the super rich is the biggest baddest lie.  This is the lie that says that our founding fathers were wrong, that being an American isn’t about life, liberty and the pursuit of happiness, it’s actually about the pursuit of  power and even greater wealth.

We also lie to ourselves.  We tell ourselves it’s ok to have that dessert, and that exercise isn’t really that important, and we don’t need to go to the dentist twice a year, and we can delay that car checkup.  We spend too much and save too little, and don’t have enough to retire on.  We lie to ourselves when we trust in our leaders to do the right thing, and when they don’t, we say, oh well, maybe it will be better next year.  Because the ultimate lie is complacency:  doing nothing and expecting that things will get better for no good reason except that we can’t think of what else to do.

So I decided to run for local office.  I realized I had to stop lying to myself and think that my world would get better just because I wanted it to.  Waiting for someone else to do it was an even bigger lie.  I am running for office because I know that I can do a better job than the incumbent, in a more professional, competent, and transparent manner.  I know that one day I may have to tell my neighbors that taxes will go up, and that traffic will get worse.  When these things happen it won’t be unexpected. 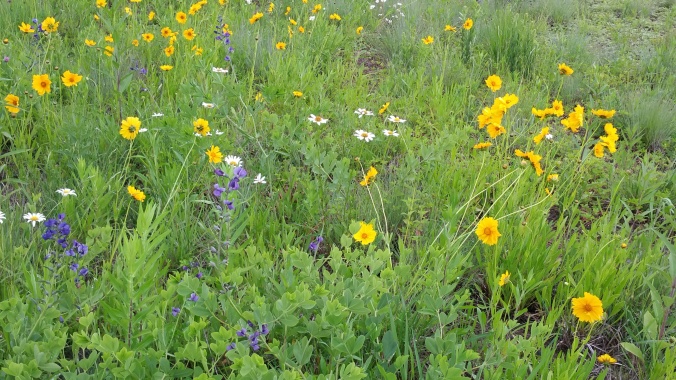 Wildflower meadow in a local park.

Surprises are bad for everyone.  Surprise:  I just doubled your tax bill.  Kaboom.  Surprise:  there’s a new development going in down the street.  Kaboom kaboom.  That’s the sound of the trust bomb going off.   I don’t think people like surprise bombs landing in their lap.   I think they just want to know what’s going on — good, bad or neutral.  You have to respect them enough to tell them the truth.  And then you have to continue to work hard every day to serve  and to maintain that trust.   That’s why I’m running for office.

2 thoughts on “Telling the truth”