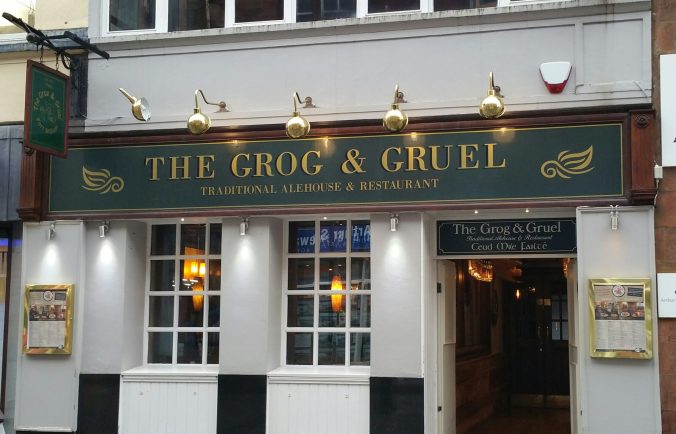 If it’s March, then it must be the Edinburgh Yarn Festival (EYF).   Last year after I learned about this European yarnfest I made up my mind to go.   I convinced Larry to accompany me, then arm-twisted my friend Esther and she in turn, brought her husband Dave.  To be honest, it didn’t take too much persuading.  This is Scotland! 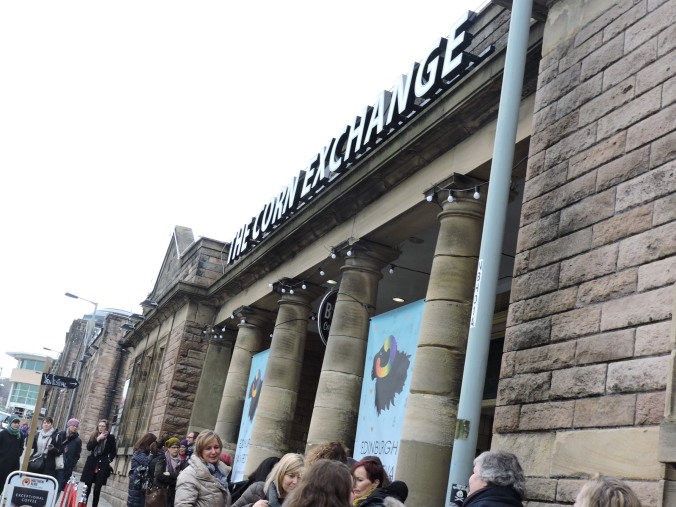 The line to get in on day one. I was so excited my photo was off center.

EYF is a different kind of fiber festival than we were used to at Maryland and Rhinebeck, which are held at fairgrounds and in barns.  The EYF is held in an indoors venue, and has four days of classes, knitting meet ups, a party, and a podcaster lounge.  More details on the festival will be coming in another post. 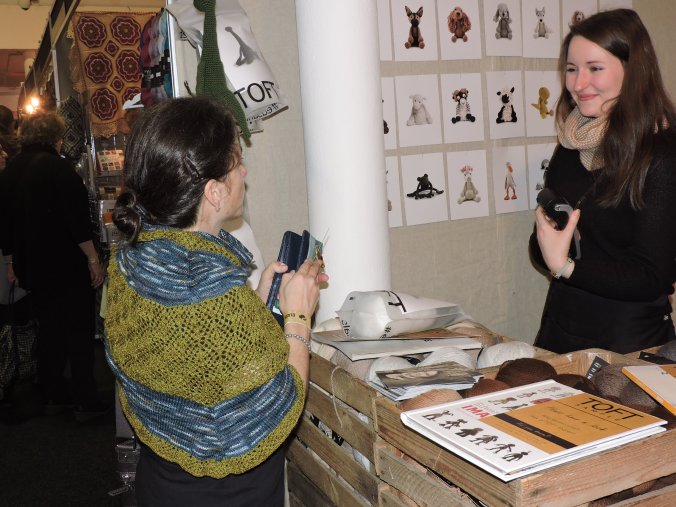 Esther making a purchase at Toft. Notice her shawl?

On Sunday we picked up our rental car and left Edinburgh for a week of exploring.  On the way we toured whisky distilleries, castles, and yes, had a lot of rain and overcast days.

If you’re in Scotland there must be whisky . . .

As you’re reading this blog post you may be thinking, “Marla doesn’t know how to spell whisky.”  The first thing we learned about Scotch single malt whisky is that Scotland is the only place where this drink is spelled without a final “e” — whiskey.  We were told that Scotland spells it correctly and somewhere along the line, an additional unnecessary letter was added.  Our friends Esther and Dave introduced us to whisky tasting early in the trip.   I haven’t partaken of whisky since my college years, so it was well overdue.

Tasting whisky in Scotland involves a lesson in the flavor chart.  Whisky has a combination of four flavor areas:  peaty, rich, light, and spicy.  Each whisky falls somewhere within these four quadrants.  I developed a fondness for the rich and spicy whisky with notes of vanilla, citrus, and spices.  We partook in pubs, at distilleries, and had a dram with dinner.

Apparently in some Scottish pubs dogs are welcome!  This lab was joined by two other four-legged friends later in the evening.  Here he is bellying up to the bar.  I don’t think he meets the age requirement, though.

Where sheep outnumber people and come in many varieties

In Scotland, like Iceland and Ireland, the sheep outnumber people.  You see them everywhere.   The sheep come in many shapes and shades.  You can buy wool from these lovely sheep with names that are hard to spell and harder to pronounce.  For example,  there is Cheviot,  Hebridean, Soay, and my favorite, Zwartbies.   How do you even pronounce that?? 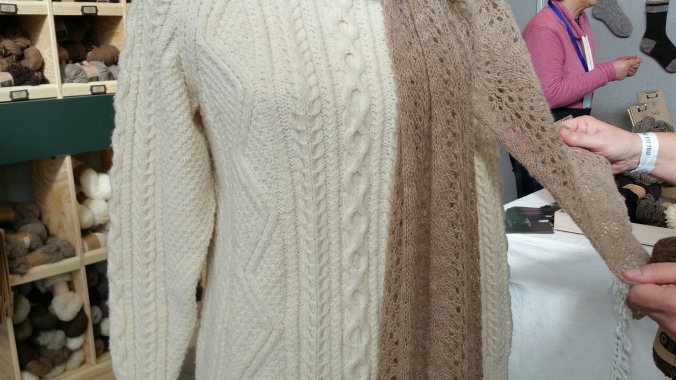 Admiring a shawl made out of Shetland lace at the Garthenor booth. Their yarn is certified organic from traditional breeds of British sheep.

Then there is Shetland.  These islands to the north of Scotland — and that’s pretty far north — are tough creatures who have to survive in a harsh environment.   Their wool is warm and light and can be made into everything from shawls to jumpers (what they call sweaters you pull over your head in the United Kingdom).  See, I’m learning the lingo!  Some sheep have no horns at all, while other have long curvy ones, or even more than one set.  And, of course, you can eat a lot of lamb dishes in Scotland, but being a non-meat eater, I wouldn’t know.  You’ll have to ask Esther.

A Jacob sheep posing. Note the brown and white fleece.

There are a lot of castles in Scotland.  Some are reasonably intact while others are a shell of their former selves, with just walls and the skeleton of the building.  During their long struggle for independence with the English, some castles were intentionally destroyed to prevent the English from taking them.  Others, like Fort George, are still being used by the military.  Fort William is just a shell.  Holyrood Castle in Edinburgh, where Mary Queen of Scots once lived, is still used by the British royal family.  Across the street from the Scottish parliament, this corner of the city is a contrast in tradition and modernity.  We were fortunate to score seats in the gallery of the Parliament and observe the session.

We passed this on the road in the Highlands and stopped for a picture.

Weather in Scotland in mid-March ranges from cool and sunny to cool and overcast to windy and rainy and freezing, sometimes all in one day.  We were lucky to have three lovely days in Edinburgh.  Our luck changed once on the road where we encountered rain and cold, sometimes all day.

Larry enjoyed a hot toddy after a day outdoors in the elements.

At the top of the hill at Edinburgh Castle we endured strong winds, and a few days later while squatting to take a picture I was literally blown over onto the ground.  We layered up and tried to keep warm and dry.  After a few hours wandering on the grounds of a castle, we headed for a pub or cafe for soup.

Edinburgh Castle.  Built on a hill it can be seen from pretty much anywhere in the city.

Soup in Scotland is served everywhere at every meal.  It always comes with a slice or two of good brown bread or a roll.  We tried leek and potato soup and lentil and tomato  and mushroom and a few others I can’t remember.  What I do remember is that it always came nice and hot, too hot, usually to eat right away.  In a country where it doesn’t get very warm, the Scots know how to serve food hot.  And when it’s more often rainy, cold, and windy, you need hot food to warm you up!

A view of the loch from one of the B&B’s on our trip.

2 thoughts on “Wool, whisky, and rain: a trip to Scotland”