Two weeks ago we went to upstate New York for the New York  State Sheep and Wool Festival, otherwise known as Rhinebeck.  Unbeknownst to us it was also the same weekend as the Woodstock Film Festival.  What luck!  Yarn, knitting, and film.  What more could you ask for but a crisp Fall weekend sporting hand knit sweaters and scarves, independent movies, good food and new friends.   I was in vacation heaven.

I wrote multiple posts about Rhinebeck last year.  This year I’m just going to touch on some of the highlights.  We only spent one day at the festival this year.   My DH was not willing to go back for a second day.  Boo hoo.  I’m hoping to do a ladies weekend next year so I can fully enjoy all that Rhinebeck has to offer.  That means two days at the fairgrounds.  Woot!

We arrived in Kingston, NY on Thursday evening after dropping the dogs at doggie daycare.  They ran in to catch up with their four legged friends and we got on the road and headed north.   When we got to our hotel the lobby was already full of excited knitters.  You could almost feel the anticipation in the air.  Rhinebeck!!!  The weather promised to be perfect:  cold enough to show off handknits, and no rain expected.  We settled in for the evening with a local paper and a plan to drive into Woodstock the next morning.

Some of you who are of a certain age may remember THE Woodstock Music Festival in the 1960s.  I have to confess I was just a wee babe in 1968.  Woodstock didn’t actually take place in Woodstock, New York.  It was in nearby Bethel, New York.  Why did it go down in history as Woodstock?  The promoters of the festival wanted to hold it in Woodstock, but the town denied them permission to have it there.  At the last minute a dairy farmer named Max Yasgur gave them access to 600 acres of land in Bethel, fifty miles from Woodstock.    In spite of this twist of geography the festival went down in history as the  Woodstock Film Festival.

Woodstock is a charming little town with historic buildings and a walkable town center.    The Woodstock Film Festival began  in one theater in Woodstock, and now has multiple venues in Woodstock, Saugerties, and, interestingly, in Rhinebeck village.

We arrived in Woodstock just before 10 am and parked on the street near the original Woodstock theater.  A movie called “Girl Flu” was playing at 1030, so we bought tickets and went in.  It was a great movie with quirky characters chronicling a difficult relationship between an almost teenage girl who, in a role reversal, is forced to take care of her child-like and irresponsible mother.   It was a lovely movie.  We then went down the street to another theater to see a documentary called “The Last Dalai Lhama?”   We caught a third movie the following day, another documentary about Rep. John Lewis called “Get in the Way.”  We felt so lucky to happen upon this multi-day film festival.  It takes place every year in the Fall.

The Indie Trunk Show has become a Rhinebeck tradition.  Now in its third year it reserved an even larger space than last year.  It attracts a huge crowd and highlights smaller vendors who can’t get into Rhinebeck but deserve exposure and have many loyal fans.  This year I wanted to check out Rosy Green yarn.   I zeroed in on one of their yarns which was blended with either Hebridean or Manx, both rare breeds.  I had just finished my purchase when I noticed . . . was it? . . . yes it was . . . could it be? . . . . STEPHEN WEST!!!!   My heart started beating faster and I said to myself “no, don’t be a groupie, don’t embarrass yourself, don’t go over and do something stupid.”

Instead of listening to my own advice I said to myself, “what the heck, how else am I going to meet him?”  I went over and as soon as another fan got out of the way I went up to him and opened my arms and we hugged.  OK, I have never done this before to anyone, ever.  Well, not to any stranger.  But this was STEPHEN WEST.  I mean, really?  STEPHEN WEST.  What would you do?  I didn’t know it at the time, but my husband had seen me go over and was standing there probably wondering who this man was and why was I hugging a total stranger.  Rather than explain I handed him my cellphone and told him to take a picture of us.  Here it is.  Stephen West and me.  I feel better now.  My breathing is back to normal.   I have had my celebrity Rhinebeck moment and can get back to the post.  Big sigh.

Knitter’s in the lobby of the Best Western Hotel, site of the Indie Trunk Show on Friday night

After recovering from my celebrity moment I went over to the Bare Naked Knits booth where Anne Hanson was showing off her lovely undyed yarns.  I love her yarn and it’s rustic sleepy feel and natural colors.   I found a cowl made with four shades of Stone Soup and asked for more information about it.  I gave my email to one of her helpers who promised to send me information about smaller yardage skeins for this pattern.  Still waiting to hear from you!

I went outside to catch up with Larry.  He was relaxing in the lobby with some knitters.  After joining them I learned that one of them, Anne, had met Stephen West in Rhinebeck village.  She took a selfie with him wearing hand knits.  Looking good Anne!

Stephen West and Anne at Stickle’s in Rhinebeck Village

Then there was Rhinebeck . . but first a moment for the Edinburgh Yarn Festival

We arrived at the fairgrounds around 8:30 on Saturday morning.  After buying our tickets we went back to the car.  It was a brisk morning and Larry had forgotten gloves.  I had my cozy Pawkies, a Kate Davies pattern.  The gates open at 9 am.  The line is long and the crowds are eager.  But before entering the fairgrounds I had another task that required my attention.  The 2017 Edinburgh Yarn Festival (EYF) was holding signups for classes at the exact same time the Rhinebeck gates were opening.  Yikes!  I had been warned the night before by new knit buddies at the Indie Trunk Show about unpredictable phone/Internet service at the fairgrounds.  Once the vendors start selling, they said, you will not be able to get online.  I came armed with my tablet and cellphone as a backup.  At 8:59 I saw the classes go up on the website, and zip, zap, zoom, I signed up first for one, then two classes.  At the same time, but in a different location, my friend Esther was doing the same thing.   We each got into two classes, one on Friday and one on Saturday.  Did I mention Esther and I are going to the EYF next Spring?  But I digress. 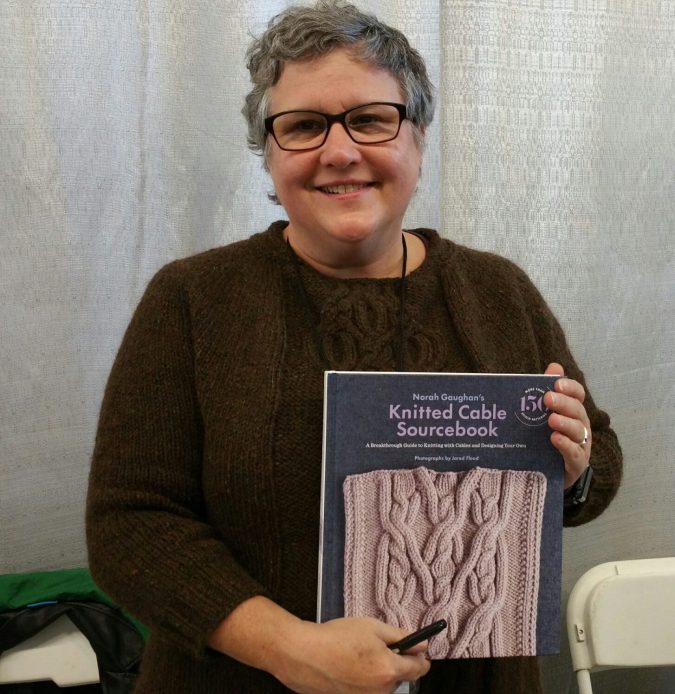 The fabulous Norah Gaughan, queen of cables showing off her new book just after I snagged a signed copy.

My strategy at Rhinebeck is still evolving.  I don’t go to the booths that have long lines like Miss Babs and Jennie the Potter.   I love their stuff, but long ago I decided to  buy at their online stores.  Why waste precious time standing in long lines?  Instead I went straight to the book signing.  It was already crowded.  Good for the authors, bad for the customers.  I am a sucker for a good knitting book, especially when I can meet the writer.  This year I bought Norah Gaughan’s new book about cables.  I took a class with her last year at Loop in Philadelphia and was bowled over by her talent of creating new and unique cable designs.

When I was in line to pay, I saw these adorable knit animals.   Nicky Epstein, the creator of these creatures, was standing nearby.  You’ll have to take my word for it!  Then I spied a book called “Journey.”  I met Bobbie Groome, the author.  Her book was about her journeys to learn more about how sweaters were engineered, from Ireland to Scotland and Iceland, from colorful traditional fair isle designs to complicated Aran knits.  She dissects each as she describes the countries she visits on her travels.

Then there’s food and drink.

Around 11:00 Larry and I separated.  He went to the food barn and I headed to The Fold and a few other vendors nearby.  As I was standing in line with a giant skein of yarn in each hand, Larry called me for lunch.  I left the line, put the yarn back on the rack, and headed for our favorite Rhinebeck lunch food, the falafel stand.  I met my friend Esther on the way down and we headed towards the food trucks.  At 11:30 the falafel line was already 20-30 deep.  Too late.  We settled for something equally fresh and healthy but with a shorter line.  Then it was apple crisp for dessert.

Esther sampling some local vodka. Which one would my husband prefer?

After lunch we decided to check out the food barn.  Esther wanted to pick up something for her husband.  We did some wine tasting and vodka tasting.  Apparently the proper way to taste this vodka is to taste it once, wait a minute, and then take another sip.  Yummy!  We usually buy cheese, but the lines were all the way out the door.  Where were all the people coming from and why were they buying cheese when it was still optimal yarn buying time?  Seriously?  We sampled some fudge and decided to be good.  Then on to the horseradish booth.  Larry bought a jar.  We didn’t see the hot sauce vendor this year, but there was plenty more to see and try.  We each had some apple crisp. No photos of this tasty treat.  We gobbled it up before I had a chance to snap any pictures.

Esther and I wandered around for another couple of hours without Larry.  At last he had had enough of the animals and the yarn fumes and went back to the car to relax.   We passed by the Peruvian band playing traditional music.  They come every year.

Then it was time to say goodbye to Esther.  She was staying with friends for the weekend.  We had to get to Jill Draper’s open house.  But first we had to get out of Rhinebeck, along with hundreds  and maybe thousands of others.  At last we arrived.

Some of the hand dyed yarn at Jill Draper’s open house on Saturday evening.

Jill Draper has her studio in Kingston, just over the river from Rhinebeck.  It was already packed by the time we got there.  I couldn’t resist taking a photo of this great cabled pullover against  a backdrop of a rainbow wall of Esopus yarn.  More people had spilled out onto the street outside.

And that was the end of Rhinebeck for 2016.  My unwilling spouse insisted we head back in the morning.   This is our compromise.  He comes with me and in return I have to give up day two.  I’m still trying to decide who has the better end of that deal.

We took the scenic route home and stopped at Dingmans Falls Park near Dingmans Ferry, PA.

We needed to take a potty break and to stretch our legs and the Park was a good place to do both.  Entrance is free and the path through the woods was peaceful and calm.