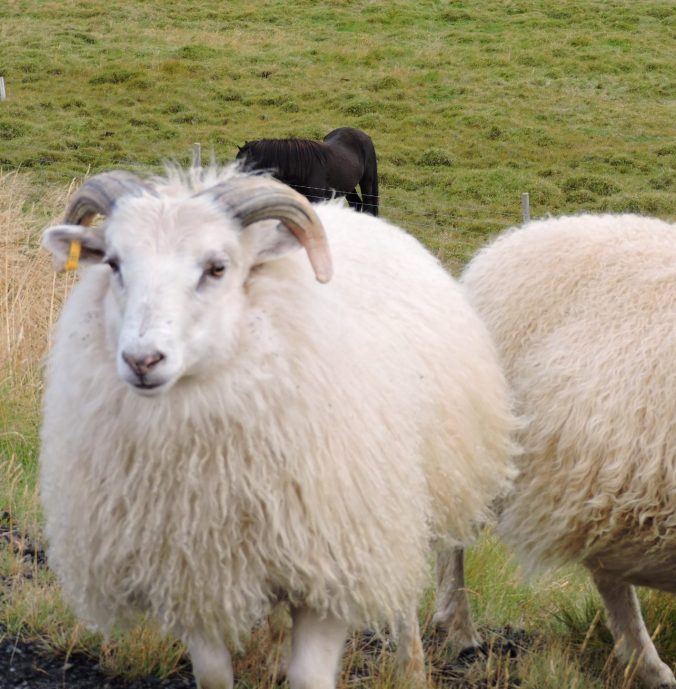 Icelandic sheep hanging out by the side of the road.

Larry and I just returned from a one week vacation to Iceland.  While we saw a lot and I took many photos, I want to start with a post about knitting.  Why, you ask?    I am an avid knitter — that was one of the draws to Iceland.   Also, it’s that time of year when the days are getting shorter and the evenings have a crispness in the air that lends itself to all things wooly.   On top of that, Rhinebeck is coming up next  month, the New York State Sheep and Wool Festival.  I am in a knitting frame of mind.

Hand knit sweaters and other Icelandic items for sale at Alafoss.

No matter where you go in Iceland you see sheep and yarn and things made out of wool.  Even many supermarkets have a section where they sell yarn, knitting needles, and patterns.  I checked out the best places to visit before we left the U.S.   Top on my list was a trip to Alafoss, a large yarn and wool products store in Iceland and the best place to get Lopi.  Lopi, the ubiquitous Icelandic wool spun from the fleece Icelandic sheep is knit into sweaters from natural colors and dyed wool worn by locals and tourists alike.  Most are hand knit, while others are machine made.  Produced from the fleece of the hardy Icelandic sheep it keeps you warm and dry. 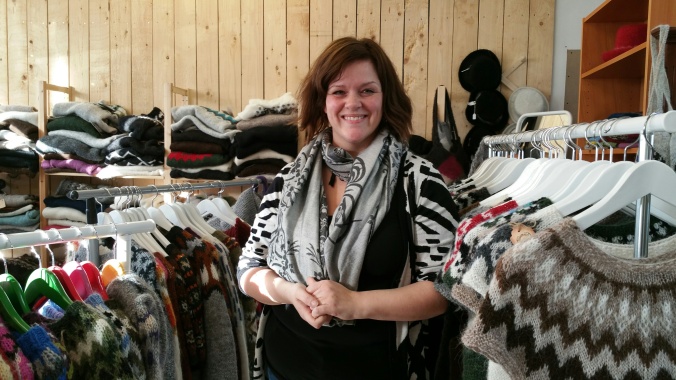 My first look at hand knit sweaters was in a village called Hella in southern Iceland.  We were staying nearby at a bed and breakfast that was also a horse farm.  Our guide book described a handicraft store in the village, so we went to take a look.  It was actually closed, but as we were looking for it we came across another shop, Litla Lopasjoppan (don’t ask me to pronounce it), staffed by the lovely Berglind.  Here she is, posing in front of some of the hand knit sweaters.    The store sells garments and accessories made by local women.   Burgling, an avid knitter herself,  told me that she was planning on going to Edinburgh, Scotland next spring for the Edinburgh Yarn Festival.  We will be on the lookout for each other there. 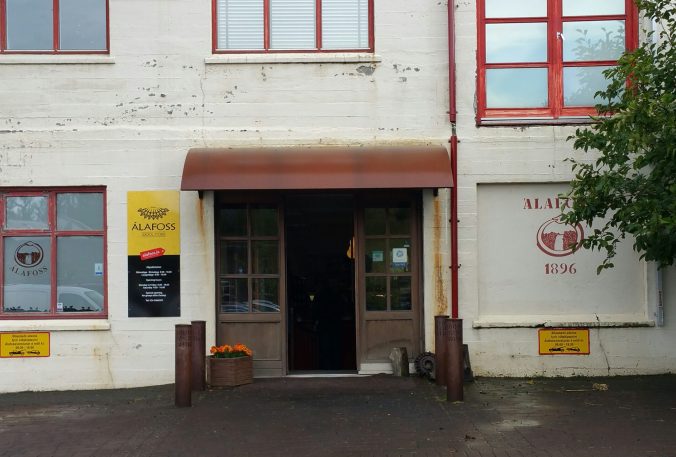 Alafoss, the place to shop in Iceland if you are a handknitter.

A few days later we were heading to western Iceland.  We passed through a town called Mosfellsbær, just north of Reykjavik.  This is the home of the factory store of Alafoss.   In my opinion factory store is a misnomer.  It’s really a fabulous store of yarny goodness that sells everything from hand knit sweaters to blankets to keychains to candy, and of course, every color in the Lopi line.   Alafoss sells a few other types of yarn as well, but I was there for the Lopi.  It has the lowest prices for Lopi anywhere in Iceland.   They also sell online and ship worldwide.   In addition they sell kits and a large assortment of patterns in Icelandic and English.  I bought a book about Lopi sweaters that was not available in the U.S. , even though it was in English.  No, I have not yet learned how to speak or read Icelandic. 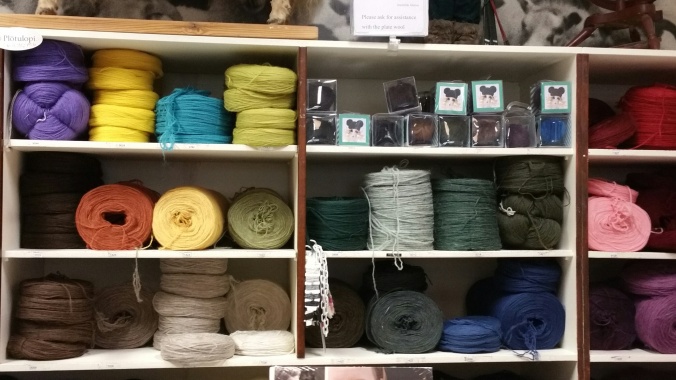 Some of the colors of “plate” wool at Alafoss.  This is unspun wool that is no longer sold in the U.S.  Yes, I bought some.  I was told it knits up incredibly light and warm.  I’m going to knit it with a strand of lace weight yarn for extra strength. 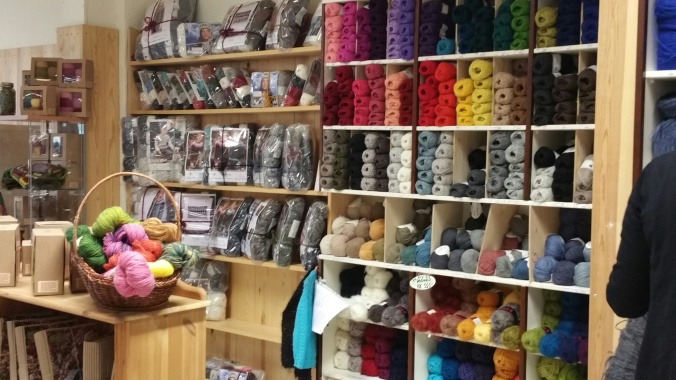 On the left are kits to make sweaters, and on the right Icelandic lace yarn. 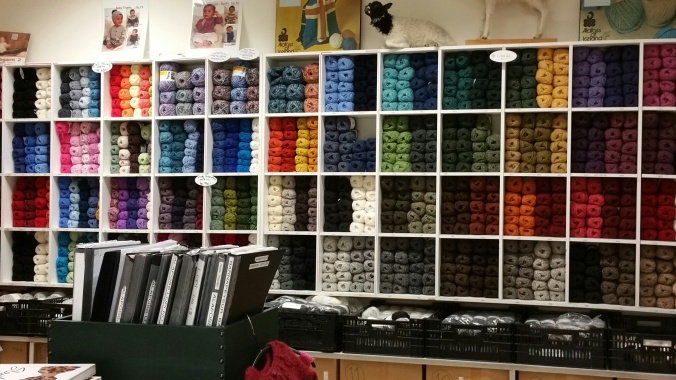 The iconic Lopi Lite in every color, called Léttlopi in Icelandic.

At Alafoss I was helped by Karen.  Most everyone in Iceland speaks at least some English.  In a supermarket I asked the cashier how old she was when she started learning English, and she said at age seven.  So I wasn’t surprised to find English speakers in a store that attracted overseas tourists.  Still, her English was awfully good.  I asked Karen where she had learned her unaccented English,  and she answered brightly, “New Jersey” where she was born.   She shared that she had an American father and an Icelandic mother.  Mystery solved!

With Karen at the Alafoss store.

A few days later we were on the Snæfellsnes peninsula.  At the start of this route the guidebook suggested a stop at a shop that sold sweaters with motifs of local animals and fish.  It was not supposed to be open on Sunday but since it was not far off our route, Larry kindly agreed to take a small detour to check, and sure enough, it was open.

Handspun Icelandic wool (above) and hand-dyed yarn (below).

The last stop on our trip was Reykjavik, the capital of Iceland where nearly 3/4 of the population lives.  This gives you an idea of how sparsely populated the rest of the country is.  The total population of the country is about 325,000.  More on that in a future post!  In Reykjavik we came across the smaller version of Alafoss, but unlike the larger suburban store, it did not carry any yarn.  I did see Lopi sold in a number of other stores as well as sweaters, but just as the guide book had stated, the larger Alafoss had the best prices and selection.

We went to a number of museums in the capital,  including one by the old harbor.  Here we met Margret, who I noticed knitting and also wearing what appeared to be a hand knit.  She was working on a new design and was kind enough to show it to me.  The sweater she is wearing is also her own design.

And the back, where the cable motif is repeated.

Margot told me that she had been the editor of an Icelandic knitting pattern magazine, Lopi & Band.    We stopped by the next day and she generously gave me a few of the magazines that were chocked full of her patterns.  After I returned home I did an Internet search on the magazine and came across an interview of her and her colleague  at Lopi & Band by Kate Davies for her book, Yokes  Small world, huh?!  I have been looking on Amazon for an English-Icelandic dictionary so I can eventually knit some of the patterns.  No, they are not in English.

Here is the link to the interview on Kate Davies’ blog.    Who knew I had met a celebrity!  Only in Iceland:  a small country with a big heart.

One of the many stores in Reykjavik that sells hand knit Icelandic wool sweaters.

2 thoughts on “An Icelandic knitting odyssey”